Okay here are a couple of pictures of Michael and the Meme hibiscus. You can see that the flowers are huge.
Posted by Aunt Debbi/kurts mom at 2:10 PM No comments: 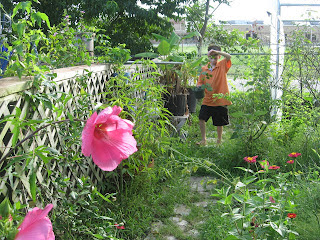 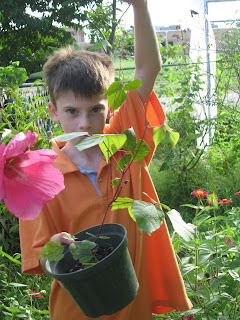 Posted by Aunt Debbi/kurts mom at 2:09 PM No comments:

How tough is this plant

My best friend is known to my boys as Meme. There is a hardy hibiscus by that name and we gave her one as a gift. She planted it near her deck and it was little, but doing fine. When her husband was doing dirt work to put in their new pool, he pretty much mangled the poor meme with a bobcat. She threatened him with his life, dug up the sad little nub of a plant with it's roots and put it in a container. That thing came back, bloomed, and now she is germinating it's seeds. Below the previous post is a picture of Rose Mallow, another hardy hibiscus. I don't have a picture of the meme, but it is a solid light pink with heart shaped leaves.
Posted by Aunt Debbi/kurts mom at 12:48 PM 1 comment:

I have been getting a lot of calls about pruning back dead/frost killed folage, mostly bananas and cannas.

I cut bananas back at about waste level. Doing this forces the plant to come back a taller than cutting it off at ground level, which is the suggested pruning method if you are trying to produce bananas. Our growing season is generally too short for a banana to produce fruit. By leaving a "trunk" the leaves are pushed up higher producing a taller plant faster. A&M suggests using the prunings as mulch. Makes sense.

I cut cannas back to ground level. This is a messy, mushy job, but it really needs to be done to keep things neat and clean and to avoid diseases.
Posted by Aunt Debbi/kurts mom at 12:38 PM No comments: 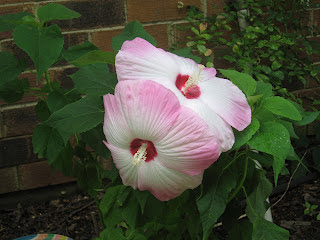 Posted by Aunt Debbi/kurts mom at 11:48 AM No comments:

Well, I missed my window of opportunity again to get my garden caught up. It was warm Saturday and I worked in the vegetable garden for a while. Sunday it was too windy, yesterday I was covered up in MG work to get our awards applications started. Now the temperature is dropping again. I am still going to plant this afternoon. If I put it off much longer, I wont get it in.
Posted by Aunt Debbi/kurts mom at 11:22 AM No comments: