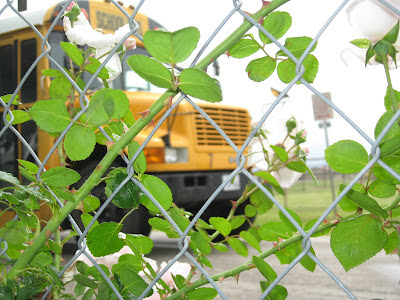 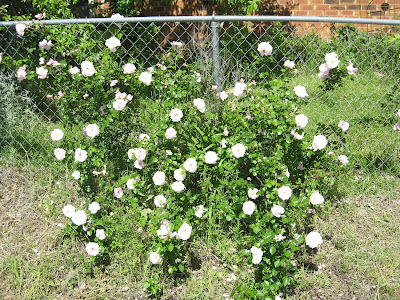 A Dr. Van Fleet rosebush attacked a school bus on the afternoon of 5/5/08. The bush had grown out of a yard and onto the pavement of First Street. Thirty forth graders on board the bus were saved by a weed wacker welding Manly Man. Mr. Man arrived just in time to keep the bush from puncturing the tires and taking over the bus by brute force. The Tiny Town Texas police voiced shock and awe at size and thorniness of this monster plant. An emergency meeting of the Tiny Town Texas Garden Club convened in order to discuss tactics to keep the monster under control to avoid further incidence. The Antique Rose Society of Tiny Town Texas launched an investigation into allegations of illegal growth hormone and fertilizer use by Aunt Debbi. There have been reports of other attacks by the same rosebush in outlying areas of Tiny Town Texas. The victims were unsuspecting husbands whose wives took a cutting of the rose not knowing what it was. The husbands were all innocently mowing their lawns when the attacks occurred. A fund is being set up to provide Band-Aids for the victims.
Dr. Van Fleet a hybrid wichuran rambler is a 15 x 10 foot rambling rosebush. It will put out roots wherever it touches the ground. Dr. Walter Van Fleet introduced it in 1910. New Dawn is a sport of this rosebush.