I wanted to make a short post in honor of Nola's birthday. Nola blogs at Alamo North. We met on the interweb, probably through Brenda, but I really can't recall. Through our blogs we discovered we live in neighboring counties. I hope to meet her at the Scarecrow Festival in Kaufman next month. She is funny and bright and I am happy to know her. She is one of the funniest commentors around. Happy Birthday Nola. I hope you spent the day at the fair.
Posted by Aunt Debbi/kurts mom at 5:22 PM 6 comments:

Dumb Dogs and Other Critters

Hugh at Rock Paper Lizard wrote a truly funny post comparing his cat to a possum. In the comments I mentioned that we have had a couple of retarded dogs. Hugh, in return, asked if they were clumsy. I decided to answer him here. 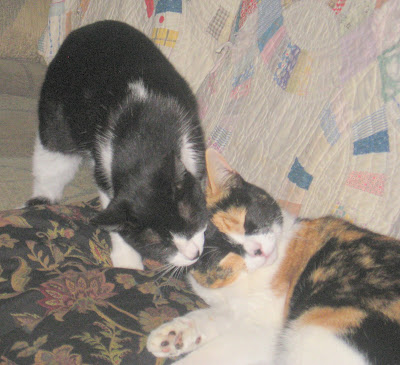 Here are Tisha and Trixie being nice. Normally, the little one chases the big one all over the house. Tisha was a birthday gift for Middle Monkey. She has spent the last five years paying us back by hunting Middle Monkey every chance she gets. Trixie, the calico, is Tisha's daughter. She barely tolerates us at all. We are just her food source. 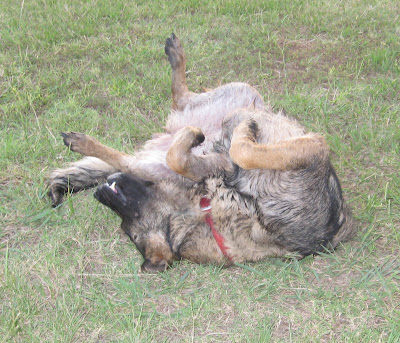 Here is Abby. She is my dog or better said, I am her person. She has an obsession with me. I cannot go anywhere in the house without her right under my feet. She seems to be convinced that something is going to get me and it is her job to be my bodyguard. This causes a lot of tripping and yelling, "Abby outside." She has a very large bone, which she likes to drop on our feet. This hurts -BAD. Abby does not qualify as retarded, just a little touched. 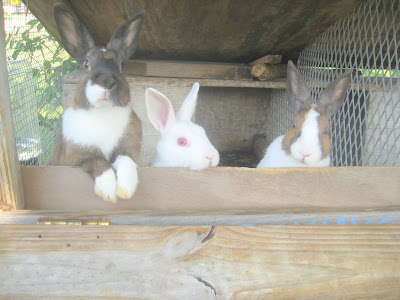 Here is the bunny family. I paid for two female baby bunnies. I actually brought home a male and a female. 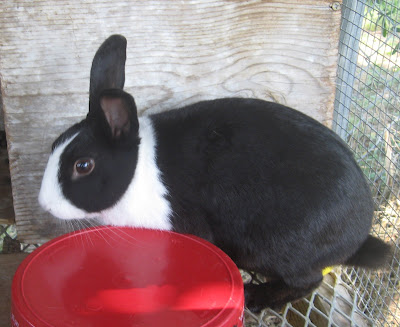 Here is Mario formerly known as Lucy. Mario is still in trouble for the unplanned bunny family.
Now for retarded dog stories.
When I was a teenager we had a grey hound named Missy. Missy loved donuts. My dad is a veterinarian and Missy was his clinic dog. One morning she put her head in an empty donut sack to lick the sugar. The sack got stuck on her head and she got scared. Now, grey hounds are fast. She went running all over the clinic through the waiting room, in the office, and through the exam rooms. Most of the staff, the ones who were not helpless with laughter, were trying unsuccessfully to corner her. She ran into almost every wall before someone managed to catch her and get the sack off her head.
Our last German shepherd was retarded. She ate the net off the trampoline so she could jump up on it and sleep.She would run down a monkey and pants them. That's right, she would get them down and pull off their pants. She would not stay in the yard and we could not bring her in the house. We tried to bring her in, but she would run around like something crazed knocking over furniture and monkeys. We put a shock collar on her to keep her in the yard. Now, I don't approve of shock collars as training tools, but this dog was going to get run over and we had to do something. I would rather put a shock collar on people who abandon animals on the side of the road. In the end, the shock collar was a complete failure as she was to dumb to remember that if she jumped the fence she got shocked. She just kept jumping the fence and being surprised when she got shocked. After a few times, I felt sorry for her and took it off. At that point we realized she was not a town dog and found her a home in the country. She was not any better for her new family and they sent her back. She ended up living out the rest of her life with my dad at the vet clinic where she couldn't get loose. You could see in her face that she wanted to be good, but she just was not smart enough to figure out how to behave. Poor Sammy was always in trouble.
Do you have a dumb dog or a smart dog?