Brother #2, my monkeys' uncle, took his girl monkeys and two of my boy monkeys to kick the soccer ball at the high school football field this afternoon. Here is the conversation we had when he brought them home.

Monkeys' Uncle, "Oh, I FOUND HIM. Guess where?"

Monkeys' Uncle, " He crawled under the pole jump crash mat. All I could see was one tiny little foot hanging out."

Me, "How long was he missing?"

Him, "about thirty seconds."


In Other Monkey News:

I say, "What HABIT do you need to break?"

He says, "Chewing my toenails."

3.) Later this very same day I scream, "Do not jump on the trampoline with scissors." I did, I really really did.

4.) Finally, It looks like Lucy is not a girl and I was unable to explain to my monkeys that one rabbit was not trying to eat the other rabbit or take a ride on her back. I'm going to need some help with the "where babies come from" thing.

5.) I thought it was over, but apparently no. I kid you not. It is 10 pm and I hear giggling. I go in and check it out. #3 stapled his blanket to the ceiling. 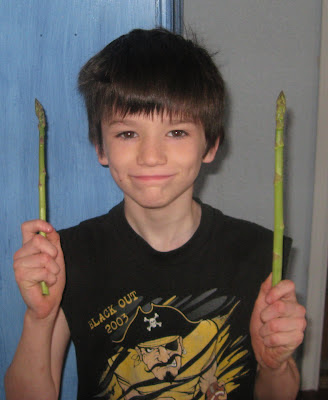 I found my first asparagus spears this morning 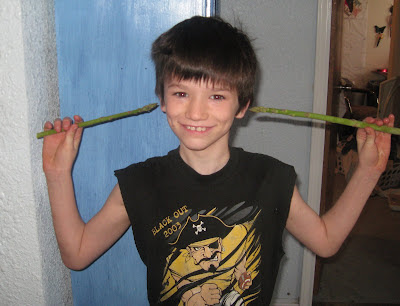 Baby Monkey grabbed them before anyone else could have any 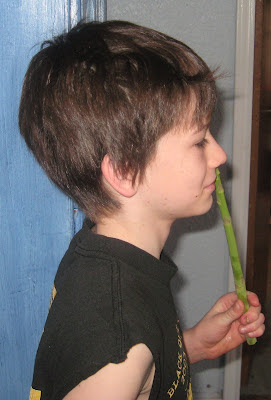 It least it's not his tongue 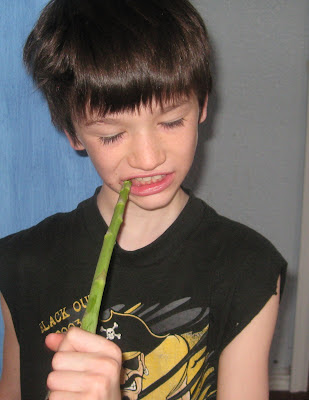 The proof my kids actually eat their vegetables.