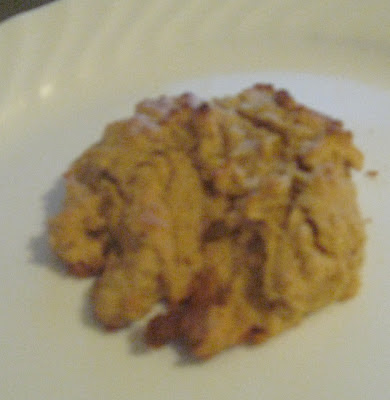 Texas is not responsible for the tomato crisis. Neither is California. Although earlier we were being investigated. Is this news? They don't have a clue where the salmonella came from.
Above is a great oatmeal peanut butter cookie made with eggs from a friend's flock. No salmonella there. Middle Monkey made them and they taste great. Please forgive the blurry picture, Aunt Debbi is tired. 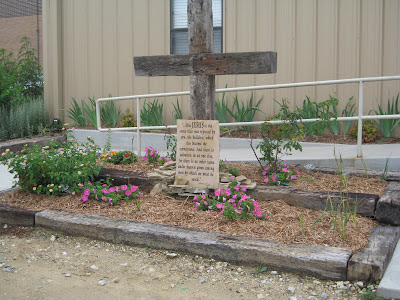 I was reading blogs (imagine that) and Silence was giving some great hints on reducing clutter. She got me to thinking about something that happened yesterday. First the back story.

Two years ago, a fellow master gardener suggested that we take on two projects. Both were to build, plant, and maintain flower beds adjacent to local charities. The first was at a senior citizens center. The second was at a local women's shelter. I did not know that there was a women's shelter.

The funds to run the shelter are raised by a thrift store. They take donations of clothing, books, furniture, toys, appliances, and sporting goods. I soon as I became aware of this set up, I began donating all of our unused, outgrown, or just unneeded stuff. Turns out with three kids and a large generous extended family, we end up with a lot of stuff.

I have been volunteering on the projects since the beginning, working on the design, installation, and upkeep of the flowerbeds. I have dropped off many many bags of clothing, toys, and random stuff for the thrift store. I also occasionally shop at the thrift store for books or seasonal clothes. It is a feel good project and a feel good way of donating.

Yesterday, it all took on a different meaning. I was talking to a fellow baseball mom during a game. I mentioned that I had bought a couple of prairie skirts at a thrift store. I was bemoaning the fact that I could not find new prairie skirts. She suggested I look at the thrift store at the women's' shelter. I explained my involvement with the women's shelter gardens and that it was exactly where I had purchased the skirts. She lowered her voice, leaned in toward me, and said,"I am staying there right now. Please don't spread it around, but they saved my life." I knew her son was staying with grandma, but I didn't think anything of it. Many children stay with grandma, especially during the summer. Turns out she was a victim of domestic violence. The volunteer staff of the center houses her, feeds her, gives her counseling, and helped her write a resume and get a job. Yes, she has a job. She plans to stay a while and save enough money to make a good stable start to living on her own.

The picture above is one of the flower beds. This is a Christian run charity, but don't worry, I am not going to get all religious on you. Before you even ask. No she does not read this blog and her identity is very well protected. Ignore the spacing, blogger is at it again and I can't fix it.
Posted by Aunt Debbi/kurts mom at 4:09 PM 6 comments: