Give a child a crayon, finger paints, or chalk and see what they will come up with. It is often sweet, sometimes pretty, and often surprising. I was once depicted as a pregnant stick figure. As stick figures are transparent, the stick figure baby was visible inside of my triangle shaped stick belly. At least he didn't ask how it got in there.

I took Baby Monkey to a meeting at the extension office this evening. He brought a Rubik's cube to play with, which kept him busy about 35 seconds. I let him have my cell phone and answer the eleventy billion phone calls his brothers made wanting stuff. He is an excellent secretary. He stopped just short of saying, "I'm sorry, she is unavailable. May I take a message?" He ran interference for me for over an hour. I had several, less than positive, messages when the meeting was over. Things like, "The computer won't work." "Can we make flambe?" and "Billy Bob and Bubba want to come over and play jump from the roof to the trampoline." Baby Monkey's instructions were to answer all questions with "No, Mom said to stay in the house and eat peanut butter."

After the meeting, I gave a few new master gardener hopefuls a quick tour of our Earthkind Rose trial. While I was yammering about roses, he said he had found some wild flowers and could he use the camera. 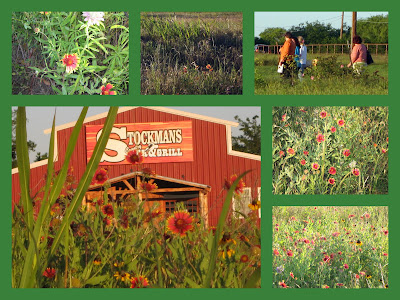 Here are the pictures he took. I think he puts his mother's photography skills to shame. Still, I wish he had not attempted to get a picture of my backside. I am the the short one in the blue shirt.

So give a kid a camera and see what they capture.