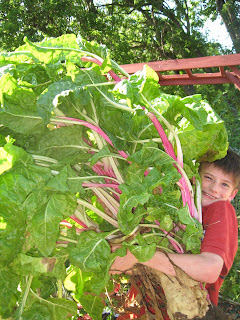 I pulled this sucker out of the garden today. The Swiss Chard, not the monkey. How are we going to eat all of this.?
Does anyone need any? 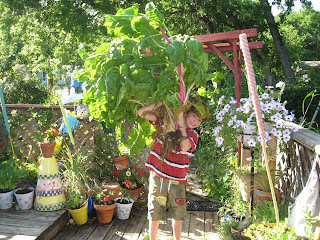 Baby Monkey had to get in on the act too. Ignore his fashion disaster.

Fire Ants. Need I say more. Well I don't but I'm going to.

This afternoon I was setting up to weed in the garden and plant some peppers. I have a three gallon container that I use to hold the weeds and move them to the compost pile. I have not moved the container in about a week. It was sitting in an area where I thought a fire ant pile had been taken care. A while back I drenched it with a mound drench of orange oil and molasses in water. Well the little Brazilian monsters were back and had made a mound up inside the container. I was not aware of this and took the container full of mad ants to the compost pile. Ants fell out on my feet legs and middle. I have fire ant stings from my waist to my toes. I won't go into the exact locations, but it was bad, very very bad. Put it this way, I had to strip to get them all off of me.

So now I am mad. I don't care about fire ants as long as they stay away from where I am working and where the boys are playing. I have been told that they eat fleas and ticks. The problems only comes up when they get in my garden or under the swing set, trampoline, or in the log cabin play house. Then they have to die.

I use spinosad with pretty good results. It just takes a long time. The mound drench is pretty effective and very satisfying. I love drowning them as revenge for stinging me. Double Danger had a hint about using coffee on the mounds. Supposedly, they eat it and explode or something. I tried fresh ground coffee beans on two mounds and it seemed to work. Now I am mad enough I want to do something more. So I go on the interweb and find more wacky ways to kill fire ants. I found suggestions such as cayenne pepper and corn starch, instant grits, artificial sweetener, and borax. I didn't have borax or instant grits. I did have chili pequin, corn starch, artificial sweetener, spinosad, and coffee. I mixed all that stuff up and dumped it on the three mounds. I will let you know tomorrow if it worked. We will call this Mad Aunt Debbi's Fire Ant Killing Concoction or MADFAKC. Never mind, I need to work on that a little.

Oh yeah, my teenager called me a communist because I made him study. Looks like he needs to pay more attention in social studies. This is not a communist state. This is a dictatorship and I am the Queen.
Posted by Aunt Debbi/kurts mom at 1:09 PM 18 comments: