Wild Flower of the Week 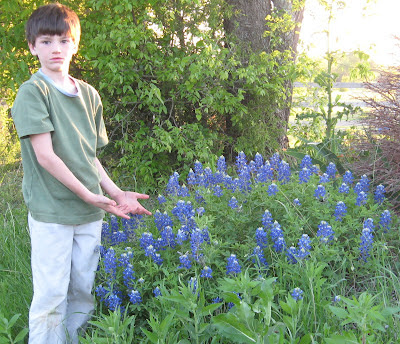 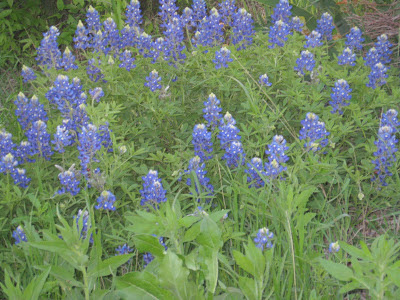 Here they are without my kidlett.
There are actually five Texas state flowers, but all of them are Blue Bonnets. In 1901 Lupinus subcanosus or Buffalo Clover Blue Bonnet was declared the state flower of Texas by our legislature. Off and on for the next seventy years there was a Blue Bonnet debate. Many people believed that Lupinus texensis was clearly a prettier Blue Bonnet. In 1971 they solved the argument by making both Blue Bonnets the state flower as well as three other Lupins. Here is how it reads "Any other variety of blue bonnet not heretofore mentioned." The other three are Lupinus harvardii the Big Bend or Chisos Blue bonnet, Lupinus concennus or annual lupine, and Lupinus platlensis the only perennial Blue Bonnet which is found in the Panhandle. The pictures above are Lupinus texensis. Thanks to the Texas Agrilife Extension for the Info.
Over the next couple of months I am going to try to post a Wild Flower of the Week. I want to learn more about the native flowers in my area. If you have a post related to wild flowers and would like me to link you here, just leave me a comment and I will come back and create a link to your blog. Everyone can play.
Here we go.
Weed Wackin Wenches are the first players. It's not a flower but it is something wild.
In Notes From a Cottage Garden I found more wild flowers. Check out small flowered Blue Eyed Mary.