I am grateful for.

My amazing enormous family
My wonderful husband
Our house full of critters
All the plants who grow, it seems, just to make me happy
Good food
A great job
Wonderful friends both in my physical and virtual worlds
Being asked for my ID to buy beer today. Kid says, 1964, really, you don't look it. I wanted to kiss his face.
Posted by Aunt Debbi/kurts mom at 8:24 PM 4 comments:

Why I am not Sewing Tonight 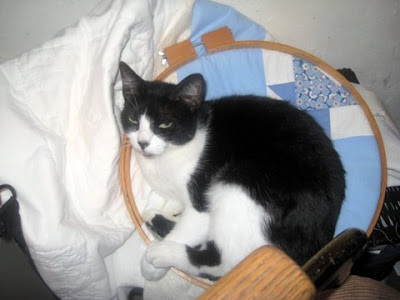 We interrupt this quilt to bring you entitled cat. We will be back to sewing as soon as her majesty moves her butt.
Posted by Aunt Debbi/kurts mom at 7:08 PM 8 comments:

Okay, I've been a really bad garden blogger. My feed has been messed up for months. I tried to fix it once or twice, but then gave up.

Today, I went over to Blotanical and found some messages and sweet things and I just feel terrible about it. I really do miss it, but can't figure out how to fix the problem.

Hopefully, I will figure this our OR somebody will save me. 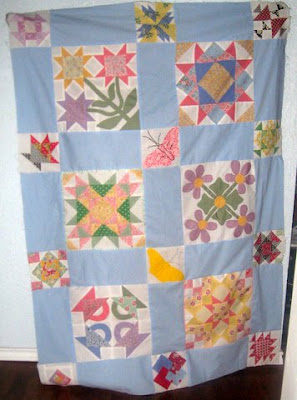 I really need your help.

Last year, at this time was about the last time I worked on a quilt. Just about that time I started working at the library. With my amazing time management skills, I managed to find Facebook instead of quilting time. Durn.

This last week, I began quilting again. This is perfect timing because I have reached the level of virtual farming in which you cannot spend your entire day at said activity without starting another game. (two of my friends have signed up their dogs, not kidding). Virtual farming is a Facebook book thing in case you were wise enough to avoid that internet crack.

Anyway, so now I am quilting again. Yet, something shifted between last year and this year and it seems to be my eyesight. Last year I used reading glasses only to thread needles. This year, I kind of need them to quilt.

Here is the problem, I have awful reading glasses skills. I have seen professionals use them. They have them perched on the end of their noses looking all wise and capable. I perched them on the end of my nose, forgot to look up and smacked myself in the head with the quilting hoop when everything went blurry.

I have cleaned off my desk top several times because of crazy depth perception. A glass of water ended up in the floor - I missed just by a little.

My eyes really hurt right now, I’ve strained them pretty bad. If you have any advise on the use and maintenance of reading glasses please please pass it on.

No, I don't need them to actually read yet. Maybe I missed a step.

This morning we had a tour of our Garden Learning Center in Kaufman. The group that visited was the Crandall Middle School Environmental Club. Yes, Middle Monkey is a member. He could barely contain himself. A lot of pictures were taken, but I cannot publish pictures of other peoples children and I really looked mean. Apparently, I take garden tours very seriously or I need a pair of sunglasses.

The kids were great. The sorted their lunch trash for recycling. They were polite and well spoken. Only one of them acted like a punk. When I pointed out his punkishness, the peer pressure to straighten up was immediate and effective. Never saw it work that way before, AWESOME.

This is why I love being a master gardener.
Posted by Aunt Debbi/kurts mom at 8:31 PM 5 comments: 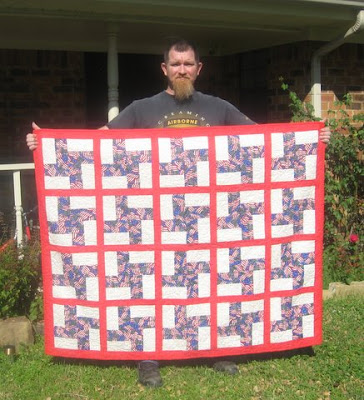 Here is my veteran with his quilt from the Kaufman Quilt Guild. I married him 12 years ago today. Best decision I ever made.
Posted by Aunt Debbi/kurts mom at 6:14 PM 7 comments:

We are having the most fabulous fall weather. I've been down with a bad bad cold for a couple of weeks and have not been able to truly enjoy it.

Today I sat outside on my handy dandy gardening stool and weeded the pepper beds The soil is fabulous. The only thing I have done differently is mulch with the neighbors grass clippings. The grass clippings I put on earlier this summer have completely broken down leaving soft, friable, rich dirt. The peppers are so loaded with fruit that they are laying over on the ground from the weight.

The leaves are falling from all of our trees so I added those to the grass clippings and mulched the beds again. I also got a huge back of coffee grounds from a local coffee shop and spread those everywhere, not even bothering to compost them. I think I will call this method composting in situ.
Posted by Aunt Debbi/kurts mom at 4:14 PM 7 comments:

A young man from Terrell, Texas was killed in Afganistan recently. His name was Shawn McNabb and he was an army staff Sgt. I have heard news of his death in the local news a couple of times and was sad, but not truly touched by this young man.

This morning I went to work on the CSA farm, Eden's Garden with Marie, the farmer. We were just beginning to sort veggies for shares when she received a phone call from a neighbor. I hear only her side of the conversation that went something like, " Yes I've got a flag. I might have a red white and blue shirt. I'm going to bring a farm volunteer with me." After locating a red sweatshirt for me and a shirt with a flag design on it for Marie, we gathered up a couple of flags and loaded up in the truck.

We we went to gather with many others on an overpass along I20 to observe the funeral procession of Sgt McNabb. I expected a couple of people on the bridge, what I found when we got there was amazing. Fire trucks lining the bridges and people standing side by side holding flags. We only knew one of the dozens of people who lined that bridge, but it didn't matter. I learned later that there were groups on the overpasses in Terrell, Forney, Balch Springs and Mesquite. One of my neighbors was with a group at the beginning in Terrell.

At first we talked and took pictures. When the lights of the squad cars leading the procession came into view, everyone became silent. There were too many vehicles in the procession to count. Many veterans road in the process on motorcycles. Some of those men solemnly waved to us and there were a scattering of salutes.

After the funeral had passed, we were all in tears and hugging complete strangers. It was the most amazing/sad thing I have ever been a part of. I was glad to join this group to honor that young man's service and sacrifice.
Posted by Aunt Debbi/kurts mom at 4:05 PM 3 comments: 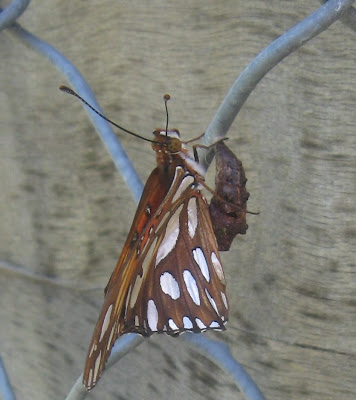 I found this butterfly coming out of it's chrysalis a couple of days ago. We are having the most beautiful fall weather perfect for gardeners and butterflies alike. My cool season veggies have been in for a few weeks and are doing beautifully. The broccoli is already more than a foot tall and the cabbage about eight inches across. I planted onions, but I cannot remember where.

Hope you are all having a wonderful fall.

Does anyone know when sweet potatoes need to be dug up?
Posted by Aunt Debbi/kurts mom at 11:22 AM 3 comments: