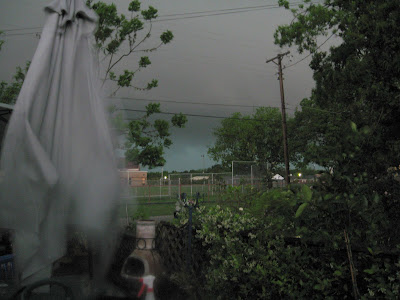 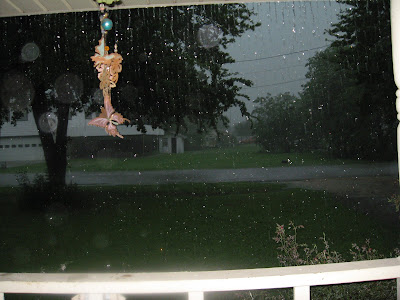 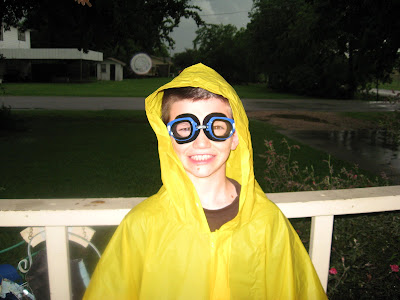 Last night was a little hairy. We had some wild storms come through. Our house didn't flood, but my sister had an inch of water in her kitchen and their trampoline was mangled by the wind.

We have two large deck umbrellas. Manly left one of them open and it was really blowing around. In the past, I would have gone out in the rain and closed it, but after reading the Lightening Series over at Rock Paper Lizard, I won't do that anymore. It did blow over, but landed in a peach tree and wasn't broken.

Baby Monkey decided he was going out to take care of it. I didn't let him, but doesn't he look prepared?

Manly works at a water plant and he was exhausted when he got home this morning. He rattled off the millions of gallons of water that went through the place, but I was so overwhelmed I can't remember the actual numbers, something like a bazillion an hour.

Over the last week, it looks like we have had between four to six inches of rain. Everything is sodden and smells like earth. It is not supposed to rain again until Tuesday. Maybe we will dry out a little by then. This has to be good for the lakes, but the Trinity river is out of its banks in some places.

It will be too wet to work in the garden for a few days. Don't worry that I won't have anything to blog about as Paul Riddell of The Texas Triffid Ranch will be speaking to our master gardener group tomorrow. I'll bring you the dirt on his carnivorous plant lecture tomorrow.