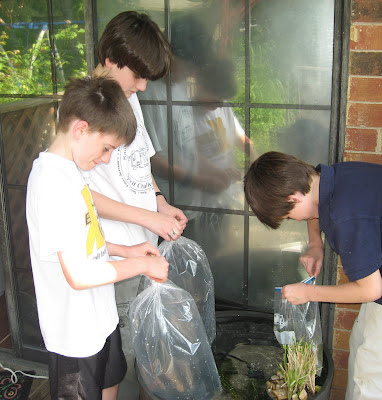 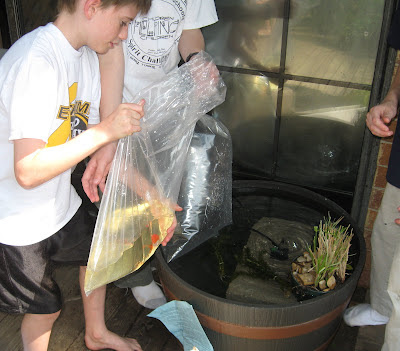 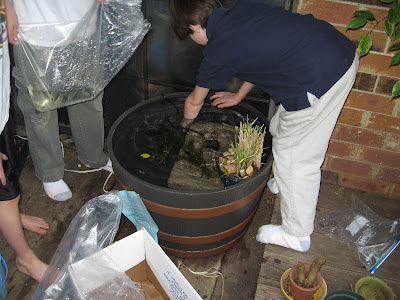 Yesterday, Baby Monkey and I went to the greenhouse. Miss Nancy took him to show him the tadpoles that were swimming around in her pool. Baby monkey went to the truck and came back to us with his soccer water jug. He begged for tadpoles to take home. I caved in and we had a bowl of baby frogs on your front porch all night.
This morning I went with Mamala to the quilt store. On the way back I asked to stop at the water garden store in Mesquite. Well, three fan tailed goldfish, five mosquito fish or Gambusia affinis, a bag of something called water grass, a plastic half whiskey barrel, a little pump, and a shaker of fish food later I now have the equipment to raise these tadpoles in a way tadpoles were never supposed to be raised. If you spoil a tadpole will it leave when it becomes a frog? This happens to every parent. There is no such thing as a free puppy. Apparently, in my world there is no such thing as a free tadpole.
I was assured that the goldfish would not eat the tadpoles and that the mosquito fish would eat the mosquitoes. I was also educated in the use of water plants for oxygen in the water vs. the need for a pump or fountain to move the water. I was told that in my half whiskey barrel, the water grass would take care of everything. I bought the little pump anyway. I’m glad I did. I like the way the water moves.
I brought all the stuff home and went to get Baby Monkey from school. We set up the whole system together. The pictures above are the boys putting their fish in the newly set up water garden. They named them. Let me see if you can figure out which fish belongs to which Monkey. There is Ketchup, Yang, and Ozzy Osbourne. Any guesses? Anyone?
To top off the experience, Baby Monkey and Teenage Monkey got into an argument and Teenage Monkey held the door closed so Baby Monkey could not get inside. I was outside with Baby Monkey. I yelled at Teenage Monkey and told Baby Monkey to move out of my way so I could open the door and put the fear of Mom into Teenage Monkey. Baby Monkey tripped and fell in the new water garden. It only took thirty minutes for one of them to fall in it. I think that might be a new record.
Guess what? I now want all the water plants they have at the water garden store. This is going to be bad, very very bad.