So, it seems it is time to tell a story about our mothers. Of course it should be touching and warm, not. Here is the story of my mother and the Queen's bathroom.

In my late 20's I worked for a large, international hotel chain. I was very very good at selling hotel rooms. Because I sold a lot of rooms, I was treated to many free trips. I went to St. Martin, Puerto Rico, Saint Thomas, New York, Puerto Vallarta, and the list goes on and on. The jewel in my travels was a trip to London. The trips were almost always for two and I was single, so I invited my mom.

We left from DFW, had a lay over at O'Hare and then on to Heathrow. What a flight. We arrived for our four day stay with jet lag and no clue what the food was going to be like. We really should have done more research on what to eat. We stayed at a new hotel on Chelsea harbor in a beautiful suite.

We visited museums, Victoria and Albert comes to mind. We went to Bath and Stonehenge. We followed a lovely lady through the streets of London. She carried a yellow polka dotted umbrella and showed us where the Texas Embassy is located. Everyone should take a street tour like that one.

The biggest, most important thing we were able to visit was Buckingham Palace. We were able to tour the palace because it was being used to help pay for the repair of Windsor Castle, which had been damaged by fire.

We were in this long long line (que) and I dearly needed to potty. Asking for a bathroom in England will get you some really strange looks. When I finally was able to make myself understood to one of the tour workers, she passed me off to someone at a side door and explained to the other proper, nice lady that I needed a W.C. They both looked equally shocked at my need, but took me to the Queen's bathroom. It was really a nice little bathroom. The second lady stood gaurd over me and delivered me back to the que and my dear mother. She was clearly glad to be rid of this crude, American, worse Texan with the bad manners to have bodily functions. I found this all to be hilariously funny, which the proper ladies found even more distasteful.

My mother is a sweet, mostly proper, little woman. She raised seven children and none of us are in jail. Most of us have college degrees. All of us respect her and hide the fact that we may want a tattoo from her. She would never ever do anything illegal or immoral. Her mother, my grandma Rhodella, raised her better. So her next question caught me totally off guard. She asked, "Did you steal some toilet paper?" Absolutely not. She raised me better than that.

Well, okay, maybe she has a wild side. 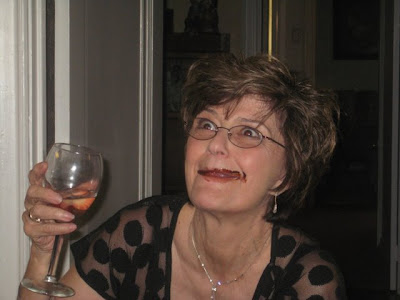 What is the craziest thing you mother ever did or expected you to do?
Posted by Aunt Debbi/kurts mom at 6:43 PM 6 comments: