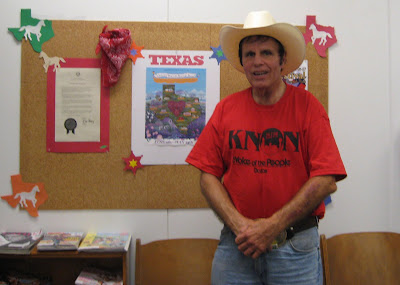 Cowboy historian Lee Powell is a patron of our little library. Each of the library ladies has a special patron and Lee is Glenda's special patron. She helps him do research on different Texas history subjects. He gives a ten minute history spot on radio station KNON Mondays at 5:00 pm. Lee has been a boxer, cowboy and stuntman. He also is a talented story teller. He generally comes in the library on Saturday mornings when we are slow and Glenda can spend a little more time on his projects. Yesterday, Glenda was off and Kathy and I were working together when Lee came in. His current project is on Elvis and Kathy hooked him up with some information. Lee hung out with us and entertained us with a story about a cowgirl stunt woman.

Lee told us that he was sitting with Roy Rogers and a little old lady one day. When the woman got up to powder her nose, Mr. Rogers told Lee that the woman was the best stuntman in Hollywood. The woman was Alice Van-Springsteen.

At another time, Lee was interviewing Dale Evans. Ms. Evans expressed that she would like to see Ms. Van-Springsteen inducted into the National Cowgirl Hall of Fame. Lee nominated her and two years later she was inducted. Lee, of course, phoned to congratulate her. During their conversation, he told her that his daughter had watched the movie The Yellow Rose of Texas as a part of her Texas history lessons at school. The kids really liked the part where the little boy almost went off a cliff on a buckboard. Just before the rig went over, Roy Rogers galloped up on Trigger and snatched the child off the doomed carriage. Ms. Van-Springsteen chuckled and said that she was the stunt double for that little boy. She also did stunts for the Annie Oakley TV show and performed for the Queen of England.

This is the kind of stuff you learn when you work at the library and pay attention to the patrons.
Posted by Aunt Debbi/kurts mom at 10:56 AM 6 comments: