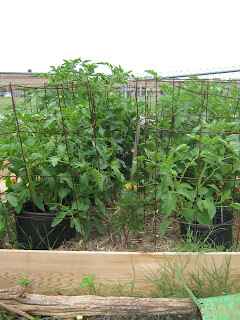 I'm having a wonderful year in regards to tomatoes.  In past years, they have been hit or miss because of the weather and rainfall.  This year, I switched the back half of the vegetable/flower garden to three large raised beds and two smaller side raised beds.  One of the side beds has large pots of citrus trees sitting in it instead of being planted.  We are in the middle of a deck demolition and I needed the storage worse than the vegetable planting space.

I read and saw pictures somewhere on the interweb about growing tomatoes in containers sunk into a raised beds.  I've tried every which way I can think of to keep the water near the roots of my tomato plants instead of running off somewhere useless.  There were a bunch of abandoned 3 gallon plant containers junking up my potting bench, so I decided to give the sunken container contraptions a shot.

First thing - Cut the bottom out of the containers.  This is hard.  My trusty Felco pruners got it started, but I ended up have to saw them out with a serrated steak knife.

Second thing - Dig a hole inside of the raised bed and sink a pot into the hole leaving about 3 to 4 inches of pot above the soil level.  Repeat until all pots are buried.

Third thing - Plant tomato seedlings in the pots with potting mix and compost.

Forth thing - Water each individual pot. Repeat as needed.

Fifth thing - Fertilize once a week with liquid fertilizer.  I'm using fish emulsion this year, but prefer Hastagrow.  (Hastagrow doesn't stink as much).

The results have been stunning.  My tiny seedlings planted April 1st have already outgrown my very large tomato cages.  I've already eaten two ripe tomatoes.  The plants are healthy, disease free and covered in blooms.  The water stays right in their root zone and I believe the containers are helping keep soil from splashing up on the leaves of the plants.